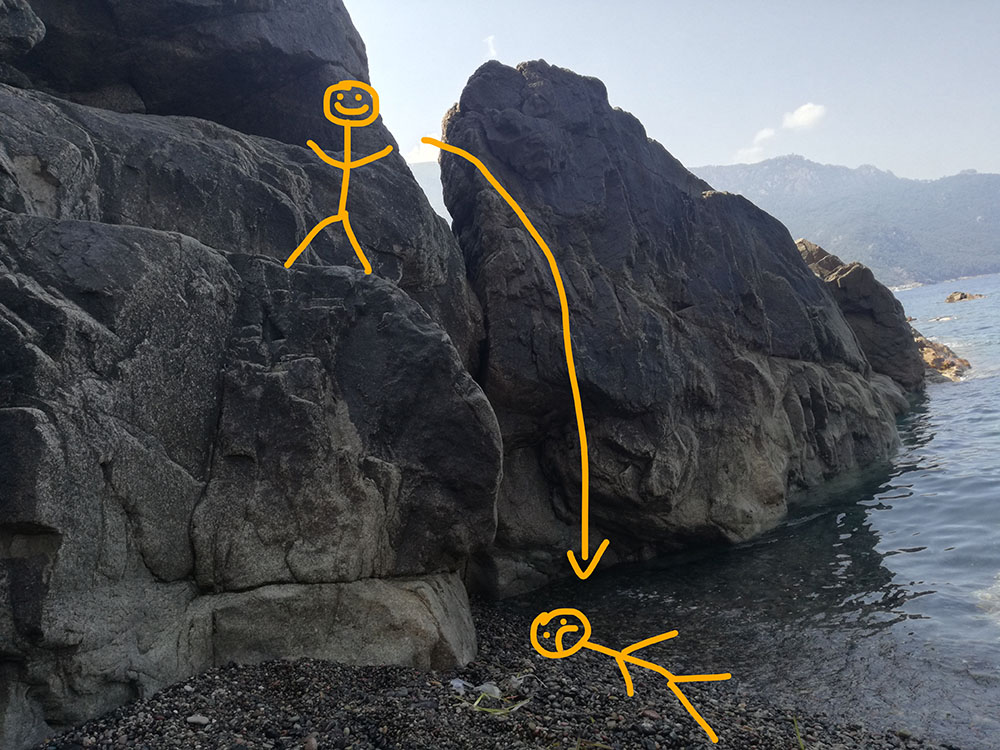 It's been a month since I hurt myself.

We were on a vacation trip to Corsica. It was the morning, and we were walking along a pebble beach, near a village called Porto, looking for the local crag to climb.

A cliff rose at the back of the shore we stood on. It took the shape of the front rim of a pair of glasses, with its lower midsection slowly descending into the water. One had to climb over a three-meter rock band to see what was on the other side.

When I escalated on the small rock to peer over it, about 2 meters and a half up, my foot slipped, and I toppled over, sideways, toward the stony beach underneath.

As I usually do when I take a fall, I yelled. Loudly.

The next thing I knew, I was trying to recover my breath. I laid in twenty centimeters of water, in total disbelief at what had just happened. I could feel a sounding pain all along my right side already pounding aggressively. I grabbed for my ribs. I instantaneously knew I had hurt myself. Julian rushed and kneeled down to help me out of the water. I could hear him shout: "Daddy! Daddy!". He was shocked and scared just as I was.

Jonathan, my eldest son, stood over me, blank, trying to fathom with the idea that his Dad had just taken a stupid fall right in front of his eyes. He thought I looked like James Bond crawling on the beach for safety after his embarcation capsized in the sea.

I tried to stand. I couldn't. So I sat, my arm across my chest. I felt like throwing up. "There would be no climbing for me during these vacations," I thought. We still had three more nights of camping to do, and I wasn't so confident that sleeping in a tent was going to be such a good idea anymore.

When we returned to Chamonix, I went to see a doctor. She did not diagnose any broken ribs. More likely, I had severely bruised my chest. I wasn't convinced, but so be it. "It would take up to ten days for the sharp pain to dissipate and another two to three weeks to recover," she said. I should rest and be patient.

For the next week, I became an expert at preventing myself from coughing or laughing out loud. I used breathing and mind shifting techniques to do just that. It worked, somewhat. I didn't have any relief when it came to going to bed. It merely hurt throughout the night. So I took several painkillers to knock me down.

After a full ten days of staying still, I yearned to walk outdoors and especially run. Any faster pace meant I would undergo a piercing pain in my ribs. So I mainly hiked, ran a little and dealt with it. It seemed as if a hammer rubbed on my bones each time I took a longer stride.

One month later, things have settled a little. I am free to run again even though I still feel a discomfort in my ribcage. But my legs are fine, my lungs are fine, I am well, the sun is out, and the sky is scarlet blue.

So I put on my running shoes, and I go for a run because I can.